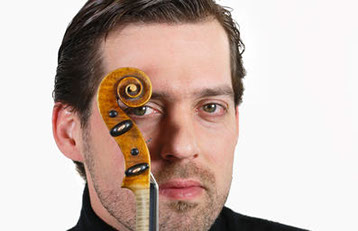 Wibert Aerts is especially known as a chamber musician and a violonist of the very appreciated chamber music quintet “Het Collectief. Several  CD’s of the latter ensemble have received  laudatory  reviews  in international professional journals such as Gramophone, Répertoire,  Scherzo and Diapasonn, monde de la musique.

In 2011 the ensemble got the Klara-award of “best musician of the year” by the Flemish classic radio.

In 1998, he decided to team up with the Spanish pianist Caridad Galindo and since then they regularly perform as a duo.

Besides he has built up a considerable reputation with daring solo recitals of modern and contemporary music.  In 2008 his solo cd “Violin Faces”, including works of Zimmermann, Hartmann and L. Berio  , comes out on the Label Fuga Libera and received laudatory reviews in international and national press such as Monde de La Musique ( 4 stars), Classiqueinfo, Crescendo, Klassik.com… to mention those few.

In a recent cdreview on “Violin Faces” The Strad magazine mentioned: “…but Belgian player Wibert Aerts has crafted this disc to perfection. ‘Violin Faces’ has a broad mix of works dating from 1927 to 2001, all highly coloured and well contrasted, and performed with tender delicacy by Aerts, whose sweet-singing tone ensures that even in its grittiest moments this music never grates.

His next projects include the recording of works for violin solo of Bartok, Kurtag and  Veress and performances of the complete soloworks of Bach and K.A.Hartmann.

In September 2016 he played the violin concerto of Charlotte Bray with the Notabu ensemble neue Musik in the Tonhalle of Dusseldorf.