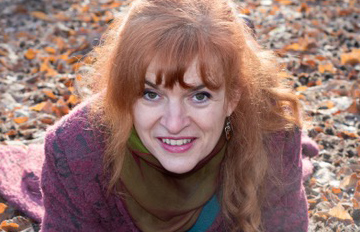 Michèle Massina practices piano, clarinet and sports with great joy before falling in love with singing. She studies first with Paule Daloze, then obtains a 1st Price with Greta De Reyghere at the Royal Conservatory in Liège in 1996.

She later perfects her art with the baritone Udo Reinemann at the Metz Conservatory (France). He will influence her greatly along her journey as a singer, on artistic, technical and scenic experience levels. Michèle Massina will take part for a few years in his Festival Tourangeau: les Heures Romantiques (France).

Michèle Massina has been fortunate to study from an early age a pedagogy both active and visionnary with Jacques Fourgon at the Liège Conservatory. After receiving her Diploma in 1985, she will work for him at the Centre for Research in Wallonia and in his Summer training courses.

She develops later her own pedagogy for work on singing trough the Body : she studies MLC©, Méthode de Libération des Cuirasses with Marie-Lise Labonté, and also various types of massages : lymphatic drainage, lympho-energy … as well as Aura Reading and Essenian Healings with Anne Givaudan and Dr. Antoine Aschram.

With the support of Ludovic de San, in 2002 she presents her vision of pedagogy of Singing with the Body and obtains the diploma of aptitude to teach singing with Honnors and congratulations from the jury at the Royal Conservatory of Brussels.Her singing teacher’s career starts that same year as assistant to Ludovic de San at the Royal Conservatory of Brussels.

Later, thanks to her experience in high level sport, she will include the Mental dimension in her pedagogic practice. From 2008 until 2013 Michèle Massina is part of the Belgian National Elites of Archery. While working with a mental coach, Manuel Dupuis, she develops her sports potential and wins international medals. She will herself become mental coach for sports people and artists from 2011.

These 4 aspects : Artistic, Technical, Physical and Mental are integral parts of her pedagogy. Beyond the technical and artistic courses, Michèle Massina proposes seminars of corporal and mental work for singers.

Michèle Massina is at present lecturer of Singing and Pedagogy at the Royal Conservatory of Brussels ; she is also a Mental coach, Essenian Healer and physical practitioner for the asbl « Voix du Corps – Voie du Cœur ».