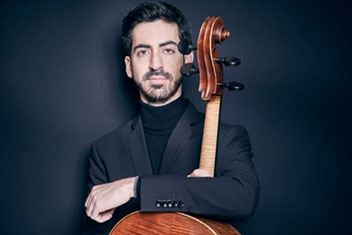 Lorenzo Meseguer  is awarded "Promusic of the Year" 2015 by the Promusica Association of Murcia.

He began his musical studies in the conservatory of Murcia continuing in the Real Conservatory Superior of Music of Madrid where he graduated with Honors. Later, he moved to Salzburg with a scholarship from the BBVA Foundation, where he completed his Master's degree at the Universität Mozarteum among the most outstanding students under the tutelage of prestigious cellist Enrico Bronzi. In 2015 he finishes his postgraduate studies with Honor at the Royal Academy of Music of London.

He did his debut as soloist with only 12 years. He recorded fort he National Radio of Spain works of J. Haydn, C.P.E. Bach, C. Saint-Saëns, E. Elgar, E.Lalo. In season 2011/12 he played the cello concerto n.1 of D. Shostakovich with  the Symphony Orchestra of the Region of Murcia, and more recently, the concert for cello of Dvorak.

He has performed with orchestras in North America, Europe, China and South America and has been a member of orchestras such as OJRM, JONDE, Schleswig-Holstein Orchestra (SHMF), Gustav Mahler Jugend Orchester (GMJO), Sandor Vegh Kammerorchester Salzburg, and of which he has been cello soloist. He is a founding member of Camerata de Murcia.

He has been a member of the historicist group "Balthasar Neumann Ensemble" of Freiburg (Germany), conducted by Thomas Hengelbrock.

He emphasizes his interest in teaching, which has led him to be invited as a teacher of the National Youth Orchestra of Costa Rica, the Luigi Boccherini Festival and recently to the Mozartian Liceo of Havana (Cuba). He has recorded his first album "Perspectiven" (Salzburg, 2013) with solo works by Reger, Ysaÿe and Ligeti.