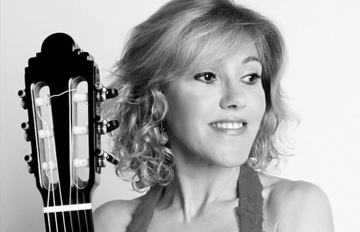 Born in Murcia (Spain), she finished her academic studies with brilliant results in guitar and viola, and later at the Guildhall School of Music in London. She continued her studies with renowned professors such as J. L. Rodrigo, D. Ballesteros, A. Carlevaro, J. M. Moreno, M. Barrueco, J. Williams and especially with D. Russell.  Rewarded in the competition dedicated to Spanish Composers (Seville), she obtained the first prize in the “Concurso de Juventudes Musicales” of Spain. She also has been rewarded in several international contests.

As a guitar soloist she perfoms with the Symphony Orchestra of Murcia, Ciudad de Granada, or Il Concerto Accademico. One of her performances of the Concierto de Aranjuez was recorded in a live CD. Other four recordings have been published by the label Opera Tres in Madrid.

Carmen María taught guitar during several years at the Royal Conservatory of music in Madrid. She did a master's degree in Musical research by the University of Murcia. Currently she is a Professor at the Superior Conservatory of Murcia, and gives an active concert and master classes work.