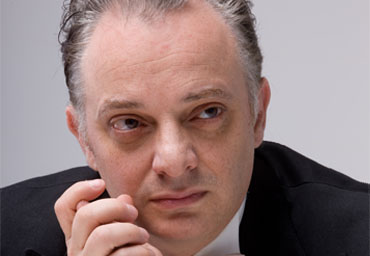 Pianist, composer, pedagogue and music researcher. He acquires their musical formation in the Superior Conservatories of Alicante, his natal city, and Real Conservatorie of Madrid, continuing later in Brussels and Paris.

He has offered recitals and master-classes in Spain, Belgium, Germany, China, Croatia, Italy and South Korea.

Committed with the music of the XX century, Narejos has played the piano integral work for Arnold Schoenberg, as well as created works of different Spanish composers and foreigners. Also he is interpreter of their own work as composer. Some Symphonic Orchestras have interpreted his music, like Bratislava, Lahti, Elche and Murcia.

Narejos frequently performed as soloist, in chamber music and orchestra, with conductors as Benito Lauret, Adolfo Gutiérrez Viejo and Joan Guinjoan. He records for Radio (RNE), Television and Compact-Disc for Verso, Opera Tres, Discobi and RTVE Música. Antonio Narejos earned his doctorate in Philosophy at the University of Murcia, Spain, in 2005.

He carried out his doctoral thesis on the Musical Aesthetics of Manuel de Falla that achieved the highest qualification form the Doctorate Tribunal, which was presided by the composer Ramón Barce. He has a broad range of research interests and has published papers and books on musical analysis, folklore and musical education.

He has formed part of several juries of national and international piano. During three years (1999-2001) it was Director of the International Festival of Youth Orchestras of Murcia.

He is charter member and president of the Association of Composers and Musical Researchers of the Region of Murcia (CIMMA), and from 2013 is Spanish delegate in the European Composer & Songwriter Alliance (ECSA).

Between 2009 and 2015 he have been Council member of the Association Europeenne des Conservatoires (AEC), and today is peer review in MusiQuE, the European agency of assessment and quality for the higher music education.

On 2011 was named academician of the Real Academy of Fine arts of Santa María de la Arrixaca.

Professor of the Conservatory of Music of Murcia, currently develops his activity in the Ministry of Education in Madrid, after a year at the Embassy of Spain to the OECD in Paris.